skip to main | skip to sidebar

Santa Claus is Comin' to Town!

Hi Everyone!
Well, the Show season is officially over for me, and I just want to thank all of you who have been so encouraging and supportive of Angel Pond Cottage and my work. Though the economy is still very slow, people have been very encouraging and there is a real community spirit among fiber artists that has been wonderful to experience. 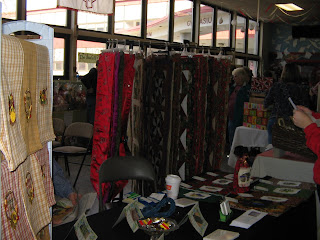 When not engaged in working on the shows, we have been knitting baby hats for Kent Hopsital, and I am including a few pictures of Kent's Chaplain, The Ven. Robin Higbie (who is also the Archdeacon of the Diocese of RI, where I am a deacon), as we looked at over 100 hats that had been made over the past many weeks, from near and far. So many volunteers have made them for us, including some great folks from Ravelry and from Knit Happens, Rhode Island, the greatest knitting group ever! Linda made wonderfully whimsical hats with Fall motifs and Judy even made two absolutely georgeous baby sweaters and hat sets for us! The generosity of people is so overwhelming, and for that, we are truly grateful. We are still making them and receiving them, so keep up the great work! 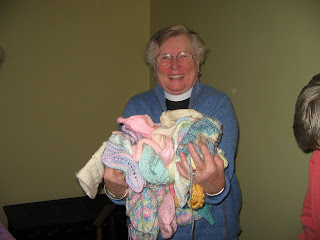 Robin, holding as many hats as she could and looking soooo happy! 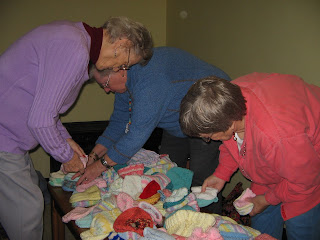 Pat, Robin and Judi taking a look at what has been accomplished. 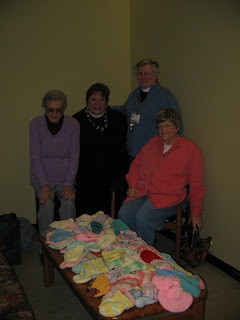 Pat, me, Robin and Judi with hats. 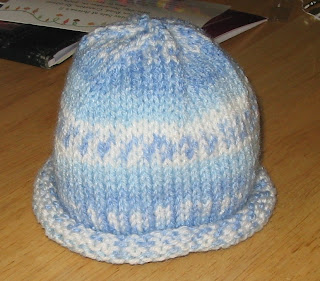 One of the hats close-up.

This morning, the snow had begun to fall in earnest and here's a picture so that you can see how lovely it looked when I went out. My friend Terry, in Australia is probably experiencing hot and arid conditions, so this picture is for you, Terry, to cool those hot Christmas days! 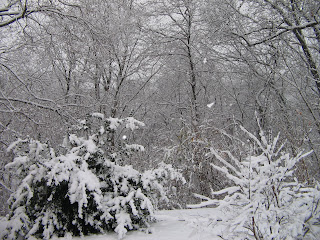 I still have Christmas presents to make, so my needles will be clacking away from now, probably until Christmas Eve. So, have a great week, and I will try to post some things before the holidays.

Barbara
Posted by BMaysStock at 7:49 AM